Generally we have come off not too badly from the flooding caused by storm Ciara.

In the club, while we have cleaned out, the building I still drying out.  In conjunction with the building management company and their contractors, some big dehumidifiers will be going in next week and some work to force dry the wall in the disabled toilet. This will cause a bit of disruption with these in the changing rooms, but as we have only limited activity going on at the moment, we can work round this. It is expected that these will be in place for 2-4 weeks so gone before our summer sessions start. If you are paddling at the club in the coming weeks please take care in the changing rooms and ensure young people are supervised downstairs.

The contractors have a key to ensure they can install the kit and monitor the drying process.

The level has finally dropped to a level where we could look at the white water course.

There is a lot of debris around. As far as I could tell there is nothing in any of the drop, but please check carefully when paddling as things may emerge as the water drops. There is lots of debris on the banks and on the edge of the eddies, so take care.

Slalom wires – the ones over the bottom pool were coiled up a few weeks ago and secured high on the wall. In the top pool, two are still up, the rest are on the near bank. Some of these are wrapped around the big tree, run down the pool close to the near bank, over the rocks and in water close to the near bank. So these are still in the river but not in the main channel and obvious enough in the pool to be avoided at the kinds of levels you’d be paddling on the course.
Wires over the middle pool are all wash up close to the wall – most on the near bank, one on the far bank. These are well away from the drops and pools and not posing a problem.
One wire had detached at both ends, but was visible close to one of the drops – this has been removed and coiled up (stuffed behind one of the brick pillars on the bank.
So, as far as I know all wires are accounted for and away from where anyone would be paddling – but please be vigilant as the water level drops in case any have been missed.  We’ll get these all coiled up and out of the way as soon as we can if the river stays low over the coming week. 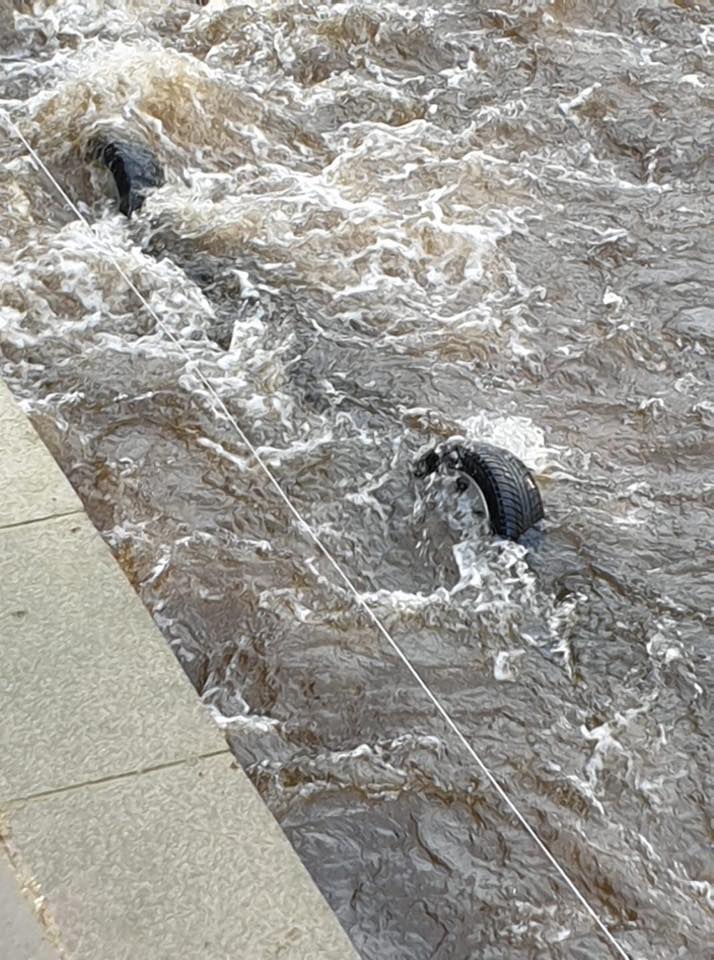 The car (blue BMW) is still there – this is not surprising as the level has been such that you couldn’t have got near to assess it let alone remove it.  It doesn’t pose a particular hazard, but is taking up a big part of the eddy, and I’d recommend keeping away from it please.  We are going to follow up with the Environment Agency and other to see if we can speed up its removal.